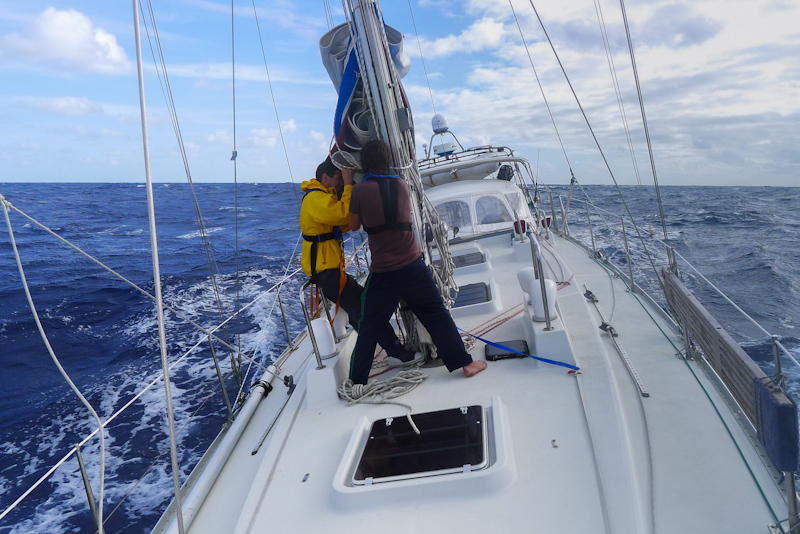 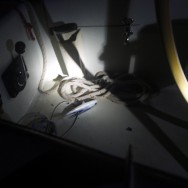 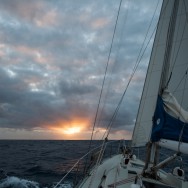 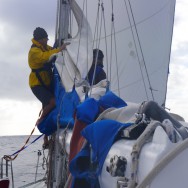 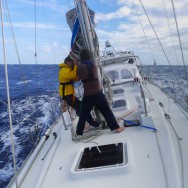 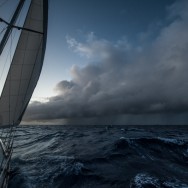 We are not optimists, we are realists, and we never expected our Atlantic crossing to be all smooth sailing without any incidents. That’s a good thing because we would have been in for a rude awakening when our mainsail halyard snapped on day 4, sending the mainsail crashing down to the deck. We also would have been surprised to find our autopilot linkage failing on day 5, annoyed to discover salt water leaking into the engine room, and bewildered when we noticed three new tears in our mainsail as we tried to re-hoist it on day 6. But because we are realists, our boat is 20 years old, and we are attempting a passage more than 5 times the size of our second biggest passage, we expected events like these and took them in stride. So we’ve spent the past three days performing MacGyver like repairs all over the boat while sailing under jib alone. Our speed has been slowed from 8 knots to 6 knots while we had no mainsail, but we made progress the whole time and probably lost no more than a day in total. We are now steaming back along at almost 8 knots with ideal trade wind conditions, relaxing and enjoying a storm-free day of sunshine for the first time on this journey.

An optimist would have assumed none of this would happen, been upset by the number of things going wrong, and probably would have been missing a bunch of tools and spare parts that we needed to fix things. If you’re an optimist, we suggest adding a little pessimism to your thinking – you won’t be as let down when things go wrong, and you’ll probably be better prepared to tackle problems when they come up. That’s just a little wisdom from the sea that has served us well.

We caught our second fish last night (I mean our second fish ever) when a flying fish on an apparent suicide mission flew into the cockpit and began flopping on the floor looking for an exit. We tossed him back (he would have made a pathetic snack), but in doing so we evened up the fishing score with Piers who caught the other fish a few weeks ago. The score is now tied at one-all, and that’s a good feeling because he’s been getting a little arrogant about his fishing skills lately.

How far can you sail into an ocean? Exactly half way – after that you’re sailing out. Tomorrow we will reach the half way point of this voyage when we cross the 1325 mile mark. We’re all looking forward to be sailing out of the Atlantic starting tomorrow, and if we’re not in the middle of repairing something at the time, it might be a good moment to crack open a beer and enjoy the view as the half way mark passes beneath us.