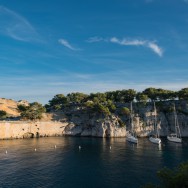 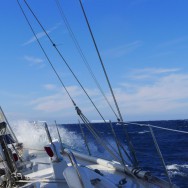 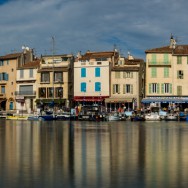 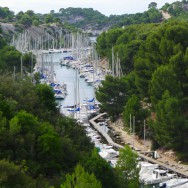 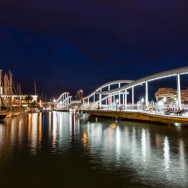 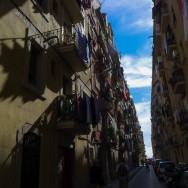 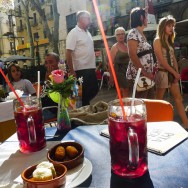 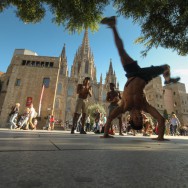 Our first attempt at crossing from France to Spain ended abruptly when our autopilot malfunctioned in heavy weather about two hours after leaving mainland France. We immediately made a U-turn back to the mainland for repair work in La Lamondeu, partially because we’re too lazy to stand at the steering wheel for the two day trip, but also because the winds were so far beyond the forecast that we were nervous about possibly getting blown into outer space. Luckily we aren’t on too much of a fixed schedule, and when these things happen we just accept it as part of the journey. We used the time to explore some more of the French Riviera on motor scooter, taking the coastal road all the way from La Lamondeu to Cannes (about 4 hours each way). If you ever decide to do something this stupid, remember to take a warm jacket, otherwise you’ll end up nearly a popsicle by the time you get back at around 2am…. if you’ve seen the movie Dumb and Dumber you can imagine the jokes we were cracking.

By the time the repair nonsense was finished, the weather forecast was showing 35 knots. We’ve had enough trouble with 25 knot forecasts, so we decided not to risk almost certain death on a 35-er (which probably would have been 40-50 in reality). So we sailed a little further west on the French coast to Port Miou, a remarkable natural canale which provides excellent shelter thanks to its very high cliffs. We moored up there for a couple nights to let the weather blow through, and walked to the nearby Cassis about 20 minutes away. It was just another example of the kinds of amazing places you stumble across when you go roaming around a place aimlessly.

With yet another storm system on the way, we had only a small weather window to attempt another crossing for Spain. We woke at 5am yesterday morning and took a beeline for Barcelona. That’s not as far as the Balearic Islands where we had originally hoped to go, but the passage to the Balearics looked too risky to attempt given the incoming weather system. Our passage was incredibly quick with 20-30 knot winds the whole way, which we’re moderately comfortable with now, and our 180-mile trip to Barcelona took less than 24 hours. So here we are sitting on La Rambla in Barcelona sipping gigantic Sangrias, asking ourselves is there really anywhere in the world we’d rather be? Given that we both think Barcelona might be the best city in the world, and la Rambla the best street in Barcelona, the answer, so far, is no.

The weather forecast for tomorrow looks good (for whatever that’s worth) so we’re planning to head to Mallorca in the Balearic Islands tomorrow morning. If we don’t update the blog in the next few days, please call the Spanish Coast Guard because the forecast must have been wrong again.