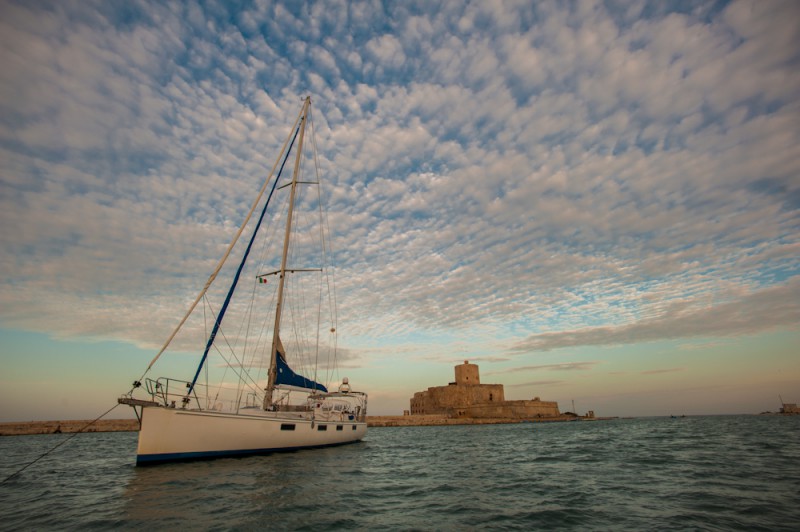 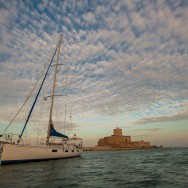 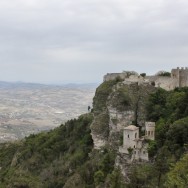 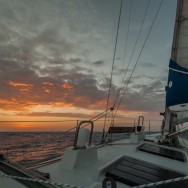 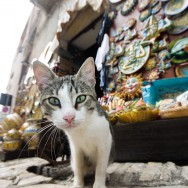 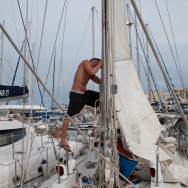 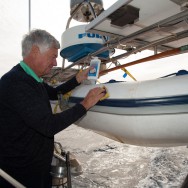 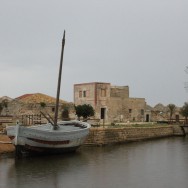 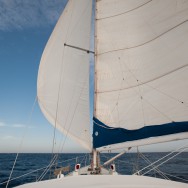 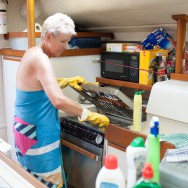 Well, here we are again in the middle of one of our sailing rampages where we move huge distances over a few days to get to another part of the med. This time our decision to sprint north about 400 miles was driven mainly by the unusually good 20+ knot winds which have been blowing steadily to the north for the past few days. When we saw this in the weather forecast it was like being offered a free ride to northern Italy… and a free ride to northern Italy is something nobody should ever decline.

When we left Malta a few days ago, northern Sardinia (a big island to the west of Italy) was our destination. To break up the long passage we stopped for two nights in Trapani, Sicily, then hopped on the back of a big wind system yesterday morning for the 220 mile ride to Sardinia. This is the type of sailing we dream about. With 25 knot winds pushing us from the rear quarter, we cruised out of Trapani and crossed 180 miles over the next 24 hours, a new personal record. We also hit a top speed of 16.3 knots (17 mph) of boat speed, which is also a personal best, and we believe the fastest this boat has ever gone (although Gibby may correct us on that).

As we finish up this leg, with Sardinia now emerging from the haze on our port (left) side, we can’t help but notice that again we’ve seen not a single other sailing boat the entire way here. It seems the pace of our program, and the distances we are now covering probably puts us in a small group of the most aggressive cruisers in the med. Most yachties out here spend several months in each country, so it takes them years to see it all, while others blast across the southern route without seeing the most interesting parts tucked up in the north. We start to wonder if Tamarisk might see more of the Med this year than any other cruising yacht.

The greatest thing about these longer passages is the confidence we build from them. Before we started this trip in April, we had such little experience on the open water (neither of us had ever done an overnight passage) that the idea of a circumnavigation seemed a distant dream. That is no longer the case – we are starting to feel in control of this mission and understand that we can deal with the challenges when they arise and learn what we need to along the way. It would have been a mistake to wait until we were “ready”. We only have one life, and we’re glad we didn’t waste too much of it “getting ready”.