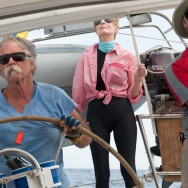 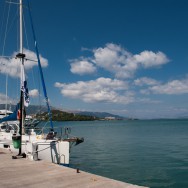 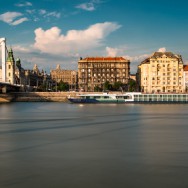 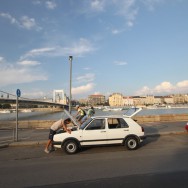 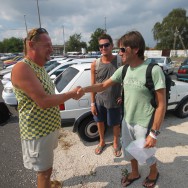 We are in a landlocked city for the first time in months. If we weren’t so busy preparing for the Black Sea Run car rally we’d probably be missing the boat already, but the chaos is keeping us well distracted from our sorrows.

The issue is that we had only 24 hours to find, buy, and register a car once we arrived in Budapest early yesterday morning. We searched all the lots around the city for the cheapest car that we felt would go the distance… about 2500 miles from here to the eastern part of Ukraine via the Balkans. We signed the papers on our 600 Euro 1992 VW Golf and will begin the rally with it tomorrow morning – the cost of the car is approximately equal to the cost of our two torn sail repairs last month. The car had to be cheap because in three weeks time when we reach Ukraine, this car is going to get pancaked and converted into scrap metal. If that sounds wasteful, it isn’t… the fuel cost of driving it back to western Europe where we could legally sell it would exceed the car’s value. We feel good about the car because it’s fast and efficient compared to the other cars we see here. We won’t win on style points, but we will probably win in the performance category, and that’s what we really care about.

“Team Tamarisk” will include the two brothers, plus our friend Christian from Switzerland, plus our friend Sam from California who did the rally with us last year. The notable loss here is The Legend (nobody calls him Tunger any more except perhaps his mum) who’s leaving us tomorrow after eight incredible weeks, so we’ll have a big toast to him tonight at the Black Sea Run kickoff party.

Tamarisk is in great hands while we’re away… far more capable hands than our own. We had three days together with Bruce, Spyro, Danielle, and Christina who will be sailing Tamarisk around the Greek Islands while we’re away. We wish them and their other friends an amazing voyage and we can’t wait to trade stories with them on our return.